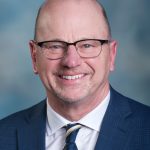 Mihalick is employed at First Western Bank & Trust as a Senior Vice President responsible for Business Development and Facilities. Prior to that, he was part of IRET and its affiliated companies for over 36 years before his retirement. He served as the President and CEO during his last eight years at IRET. Throughout the years, he has been involved in numerous civic organizations dedicated to Minot’s betterment. He currently serves on the board of the Minot Family YMCA; current member and past chair of the MSU Board of Regents, and he is a past board member of Trinity Health.

Ohio native Mihalick attended Minot State University and obtained a Bachelor of Arts in Business Administration in 1981. During his college career, he played football for four years and participated in track for two. He was inducted into the MSU Athletic Hall of Fame in 1995 and received the MSU Alumni Golden Award in 2014.

He and his wife, Laura, have been married for 36 years and are partners in their conviction to civic engagement. Laura is a member of the Minot Public School Board. The Mihalicks have two adult children living in Minot, ND.

Jon Backes is the President of McGee, Hankla & Backes, P.C., a full service law firm operating continuously in Minot since 1901. Jon is North Dakota native, born in Grand Forks and raised in Minot. Backes graduated from Minot Bishop Ryan High School in 1979 and received a B.S. in accounting from Minot State University in 1984.

Following graduation, Backes was a licensed realtor and worked for Signal Management in the property management and real estate business from 1984 to 1987. He later earned a juris doctorate (with distinction) from the University of North Dakota School of Law in 1990. Jon was selected as a member of the Order of the Coif, national scholastic honorary society. Following graduation, he practiced securities and commercial law in Denver for several years before returning home to Minot in 1993.

From 2007 through 2011 Backes served on the State Board of Higher Education spending two years as vice president and chair of the budget audit and finance committee, and one year as president of the Board.
Jon and his wife, Karla have three adult daughters.

Jill Louters began her term of service with the State Board of Higher Education July 1, 2018.  Louters has 32 years of experience in education, currently serving in her eighth year as the superintendent for the New Rockford-Sheyenne School District.  Her district received the Governor’s System Innovation Award in 2018 and the National Blue-Ribbon Award in 2019 based on superior student achievement.  Her district is currently working with the North Dakota Department of Public Instruction on a collaborative, five-year grant to redefine customized, personalized learning across the state of North Dakota for all PK-12 learners.

A native of southern Minnesota, Louters worked as a social studies teacher, coach and middle school principal prior to assuming a position on the faculty of Minnesota State University, Mankato, Minnesota.

Louters completed her undergraduate degree at Concordia College, Moorhead, Minn., and her master’s degree in education administration at Minnesota State University, Mankato.  In 2017, she was the fist North Dakota superintendent to complete her National Superintendent Certificate through the American Association of School Administrators and is currently completing her doctoral dissertation through St. Mary’s University of Minnesota, Minneapolis, Minn.

Louters has held membership on the New Rockford Chamber of Commerce, New Rockford Area Betterment Corporation, Sheyenne Economic Development Council and as a carded 4-H Horse Show Judge.  She has traveled extensively, training university staff in Europe, South Africa and Thailand.  She is the mother of four children who reside in Sheyenne, North Dakota.

She also serves as the Airport Manager at Harry Stern Airport, Wahpeton, N.D., the Executive Director of the North Dakota Aeronautics Commission, a Board Member for the Fargo Air Museum, and the Richland/Wilkin Salvation Army Service Unit.

Schreiber-Beck has served N.D. District 25 in the N.D. House of Representatives since 2015. She is also a former educator. 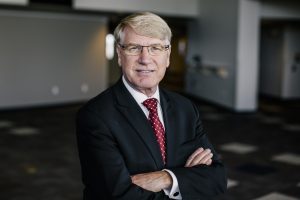 Throughout his career, he has been involved in education as a high school teacher and as a college instructor and administrator in a variety of military and civilian institutions, including the United States Air Force Academy.

Dr. Skogen is the author of a legal history of federal Indian policy that was published by the University of Oklahoma Press, as well as articles and reviews in historical journals.

She worked as a critical care nurse and in public health before becoming a nurse educator. Ms. Traynor has been the director of the Dakota Nursing Program since 2007. Under her leadership the Dakota Nursing Program nursing programs have grown in size and quality. Traynor has acquired and directed several grants focused on strengthening nursing education.

Traynor has a history of service to her community and the state. Appointed by Governor Hoeven in 2006 and again in 2010 Traynor was a member of the ND State Board of Nursing until 2014. She chaired the Education Committee for seven years and the Technology Committee for two years as well as serving as the boards vice president for three years and president for two years.

In 2016, Traynor was awarded the North Dakota Rural and Public Health Outstanding Rural Health Educator/Mentor Award. She currently volunteers her time as a preceptor for graduate students and at the Lake Region Community Shelter in Devils Lake.

Mike Warner brings a unique cross-section of diverse experiences to the NDUS Foundation. Warner has background in health care, agriculture, food processing and policymaking, with a wealth of perspective from both private and public sector associations.

Warner currently serves as treasurer for the Dakota Medical Foundation, and has served as president and founder of Agriceutical Resources Co., formed Pedigree Technologies LLC, and prior to those ventures ran what was considered to be one of the largest sole proprietor sugarbeet farms in the U.S.

Warner’s service record is also extensive. He has served on numerous boards, councils and steering committees, including the Board of Directors of American Crystal Sugar, the nation’s 2nd largest sugar processor/marketer and the Meritcare Health Services Board of Trustees. These two organizations were the largest businesses in the region, during the time of his service, with combined revenues of over $1.5 Billion. He was the national legislative chairman for the American Sugarbeet Growers Assn. During his tenure, the sugar policies upon which the industry now depends were developed and legislated. He also served on the Minnesota Migrant Health Council Board of Directors, the Dakota Growers Pasta Company Founding Board of Directors, Progold corn processors development steering committee, the Halstad Elevator Company Board of Directors, Director of the Ag Product Utilization Committee (APUC) and the Governor’s Committee on Value Added Agriculture, among many others.

Warner graduated from North Dakota State University in 1972 with a pharmacy degree and received the Upjohn Achievement Award. Since then, he has served as a teaching fellow at University of Missouri Columbia, been part of the 2010 NDSU presidential search committee, received the NDSU Heritage Award and was named the 2003 NDSU Outstanding Agriculturalist, among many more distinctions.

Dr. Mark R. Hagerott is Chancellor for the North Dakota University System. He was appointed to the position following a unanimous vote by the State Board of Higher Education on April 30, 2015. Most recently, Hagerott served as the senior civilian and deputy director of the Center for Cyber Security Studies at the Naval Academy and served on the Defense Science Board study of unmanned systems during the summer of 2015.

A certified naval nuclear engineer in power generation and distribution, who also served as chief engineer for a major environmental project involving the defueling of two atomic reactors, Hagerott changed from engineering to a career in higher education in 2005. Hagerott has conducted research and writing about the evolution of technology, education, and changes in career and the workplace.

Hagerott held numerous academic leadership roles to include the dean of humanities and social sciences, special assistant to the provost, chair of the admissions board, chairmanship of senior faculty senate committees pertaining to assessment and accreditation, and as a planning and strategy director in one of the largest U.S. Army educational organizations. Prior to his transition to an academic career path, he held numerous leadership positions in the U.S. Navy, both aboard ships and in administrative positions in the Department of Defense. He is a fourth-generation North Dakotan.

Hagerott holds a B.S. from the U.S. Naval Academy, an M.A. in political science and economics from Oxford University where he attended as a Rhodes Scholar, and a Ph.D. in history from University of Maryland, and also served as a White House Fellow.

Tammy Dolan is the University System’s Vice Chancellor of Administrative Affairs and Chief Financial Officer. Dolan oversees administrative affairs as it impacts all stakeholders within the university system.

She previously worked in the Office of Management and Budget Fiscal Management Division as a management and fiscal analyst. While there, she helped develop and implement a new funding model for higher education in North Dakota, which focuses on completed credit hours.

Her 25-year career in state government has centered on the financial and administrative operations of multiple state agencies and the legislative process. In that role her expertise included a portfolio representing 20 state agencies responsible for the state’s education and economic development systems. She worked with OMB for nine years, 14 with Workforce Safety and Insurance, and two years with the Office of the State Auditor.

Dolan has a Bachelor of Science degree in Accounting from Minot State University, and both a Master of Business Administration and Master of Management – Human Resource Management from the University of Mary.